The Tale of a Toad

The power of a painting to spark the imagination was perfectly illustrated at our 137th Annual Exhibition when‘Toad Writes a Letter’ by Sylvia Von Hartmann RSW inspired several stories.

Here is one of those tales by Norma Brown from writers group Words on Canvas. 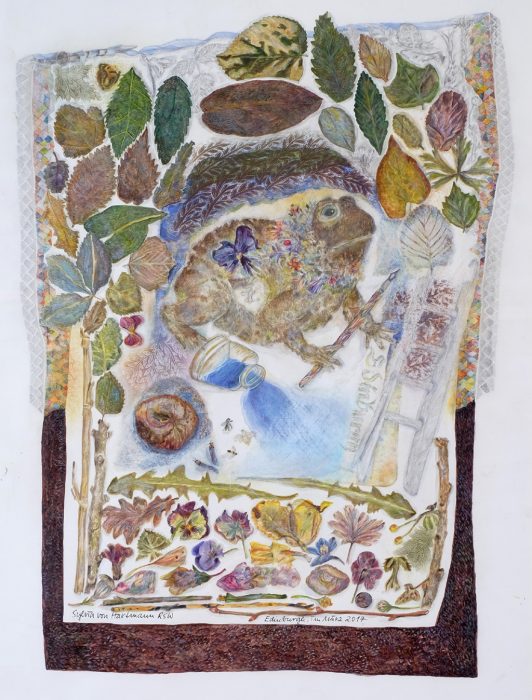 The thing about toads is they are quite hard to see, so when Mr Toad almost bumped into the two young girls sitting on the grass, he quickly squatted down so as not to be spotted. He’d just wait until they moved away. The other thing about toads is that they have very very sharp hearing. Mr Toad watched and wondered what the girls were doing. One held a small boxy thing in front of her face while she tilted her head to one side and made a pouty face. There was a very quiet click then another and another as she smiled and pouted again.

Her friend was talking all the time.

‘Oh he looks nice! What’d you think of the ginger one?  Like maybe a bit too old?’

There was a pause as the two girls looked at the thing pouty held up.

‘Whaaw! Nice eyes and look at that jaw! Awesome, where’d you find him?

‘I sort of like tried a lot of dating sites and didn’t find any interesting blokes. Then I searched on ‘Muddy Mates’ and he popped up. It’s a site for folk who like the countryside. He texted me. Wants to meet up. Maybe a meal or something.  Might even get some flowers! What’d you reckon?’

Just at that moment a beetle scurried past and Toad without thinking opened his mouth and snapped it up.

‘Hey yuk, look at that ugly frog…! It’s like disgusting!’ The girls jumped up, faces screwed in horror.

Toad waddled under the nearest bush. How rude he thought. I’m not a frog. Not ugly either. As he sat thinking about what he’d heard, it began to sort of make sense.  Maybe he was lonely with no Mrs Toad because all the ladies thought he was ugly. Those girls had liked nice eyes, well he certainly had big eyes and he’d got the pouty mouth.

Back at his wee hidey hole Mr Toad set about his idea for enticing the love of his life. There was a lot of work to do. First he foraged for as many nice leaves as he could, choosing the most colourful he could find. Carefully he arranged them in a circle of browns, yellows and reds. It took quite an effort but he managed to tug a few twigs to look like a picture frame. Being spring there weren’t many flowers, still he found some wee violas and a few pretty seed heads, even enough violas to make himself a flowery scarf. No one could call him ugly now! That just left the meal the girl had talked about. A few caterpillars, the odd fly, a beetle or two and now he was ready. How was he going to make sure the ladies would know about his romantic hideaway though? Write a letter of course and stick it up outside! Toad pads are not the easiest for holding a writing stick so when he knocked over his little pot of ink Mr Toad had to abandon the letter idea. Instead he practised and practised his croaking, interspersed with little clicks like the girls had used. Clicks must be important he thought. Then he was all set for a special date with the lady of his dreams. A pretty boudoir, tasty supper and with a bit of luck some after dinner ‘hip hop’ dancing!

How could his plan possibly fail?