Time for a Poetic Delicacy

A ‘poetry sandwich’ is the perfect description for what happened earlier this year at our 137th Annual Exhibition when a painting inspired by a poem inspired a new poem.

The painting ‘The last tooth of time’ by Anthea Gage RSW (below) was inspired by the poem “My father’s watch” written by the well known American poet John Ciardi (1916-86). Anthea explains “The first lines of the poem are ‘One night I dreamed I was locked in my father’s watch’, and they were read to me by chance during a book folding workshop. When I heard them I had an immediate feeling that it would become one of my paintings. 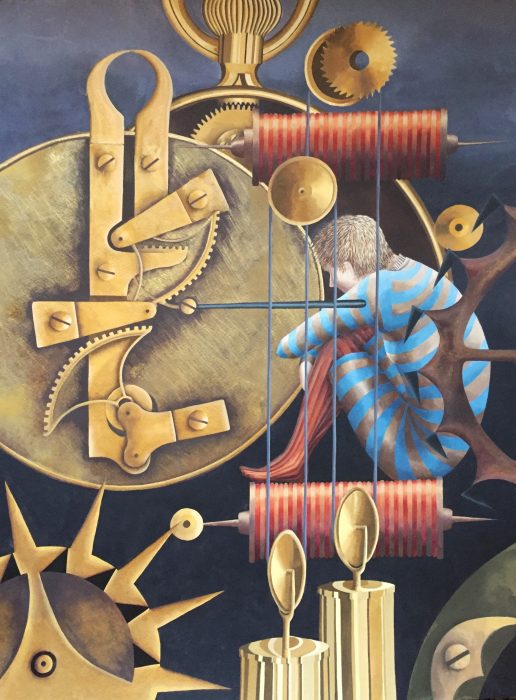 The last tooth of time by Anthea Gage RSW

“I took a year to research clock construction and mechanisms and slowly the idea developed. It was never intended that the young woman would look trapped, but only resting in the space between ticks, and interested in the mechanism. She is perhaps a younger me wearing a dress I loved that I got for Christmas one year when I was eleven.

“I greatly enjoyed the challenges of this picture and may well explore the theme further. For me the narrative of the work is a vital part, and whatever story you see within it is a good one.”

Here is the story seen by Susan Grant from writers group Words on Canvas.

THE LAST TOOTH OF TIME

In the long ago
ruled by night and day
Time passed
in its natural order of happening.

But Man, born into a legacy
of dying as Life unfolded
felt need to interfere,
to mark its passage
with shadows and sand trickles,
wheels and cogs,
ticks and tocks.

He dated it in diaries,
constrained it with calendars;
tinkered with it twice a year
inhibiting its flow
for his own ends.

He wasted it, then found
Time waits for no man.