One of the pleasures of visiting an RSW exhibition is experiencing the wide variety of subjects which inspire artists and imagining the story behind each painting.

For several years the RSW has partnered with the writers group Words on Canvas to present an evening of new writing inspired by the paintings in the exhibition.  Snow prevented it happening during the current exhibition; however, the writers had already written poetry and prose in response to different works, so we are going to share a selection on our blog.

This first poem by writer LesleyMay Miller is inspired by this painting by David Forster RSW. 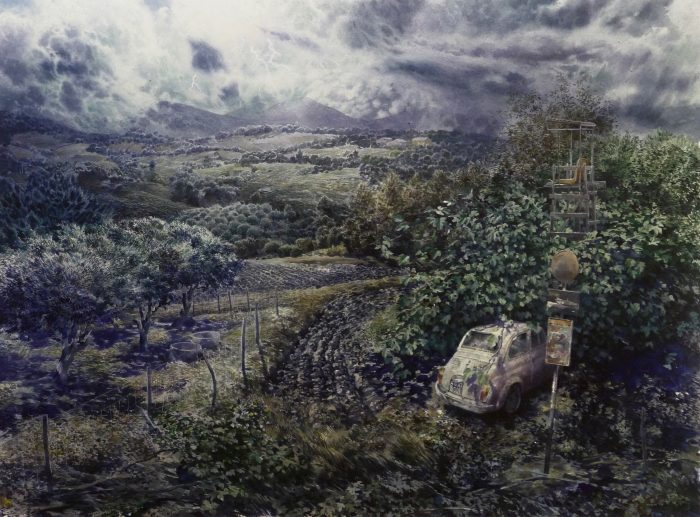 Here Too She Found Shelter

My new car and I mapped the Border hills.
We followed rivers, sketched
a web of ways, wide circles of lanes,
woodlands with open arms. We found
meeting points at the heart of the land.
Took the final route to the coast.
No driveway at this house
but now on my parking space
sits that loyal vehicle filled
with good soil, a hawthorn
and rowan tree flourishing
through the sun-roof.

Artist David Forster RSW won the Fabriano Residency Award at the last RSW Open Annual Exhibition, and this painting, Here too She Found Shelter from the Storm (Fabriano, Italy), was inspired by his visit.  It is a composite of things found during walks outside of town and captures the effect of a lightning storm.  He explains “Towards the end of our stay lightning storms began to brew over the nearby mountains. We watched the lightning one night from a hill above the centre, an effect I’ve tried to get in the painting.”

The 137th RSW Open Annual Exhibition features over 180 paintings and is open until 8 March 2018 at the Royal Scottish Academy, Edinburgh.