Our 5th Annual Summer Exhibition has returned for a third visit to the Meffan Museum & Art Gallery in Forfar.  The exhibition, which was open to all watercolour artists in Scotland, features over 180 new works by some of Scotland’s leading artists alongside talented young artists from across the country.  A wide variety of subjects and styles of painting means there is something for everyone to enjoy. 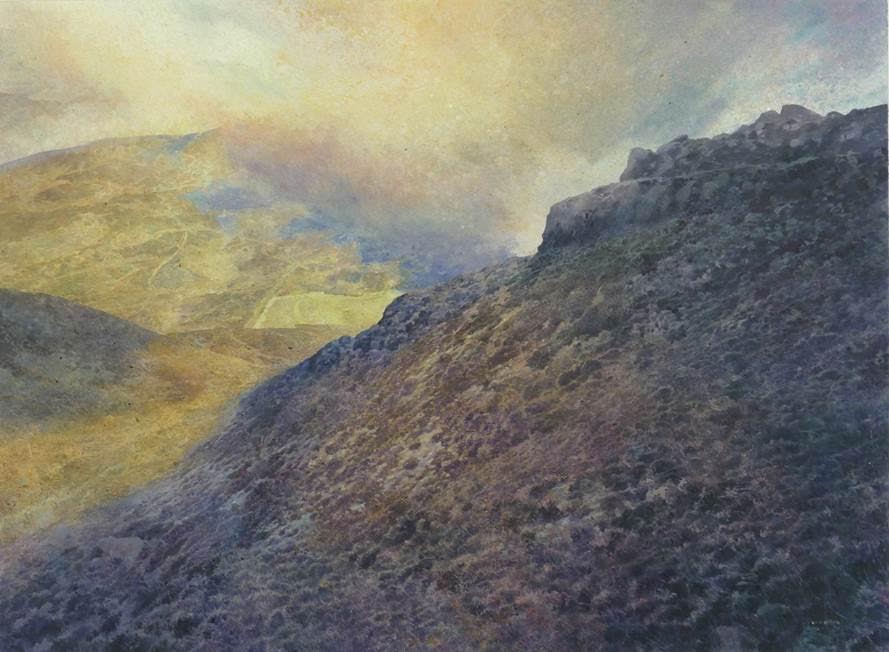 The featured painting in this exhibition is And he was king of the golden mountain (Ben Vrackie) by David Forster RSW.  Explaining the inspiration behind the painting he said “In my early paintings, I became fascinated by the way in which nature creeps back into the urban space, and the way in which we model parks and planted spaces to evoke an idealised sense of our relationship with nature.  As my work has moved out of the city, this balance has reversed, with the man-made now often but a tiny element dwarfed by the wild.

“In this view from the flanks of Ben Vrackie near Pitlochry, the frozen loch in the valley is artificially dammed and footpaths thread the hill behind. I like the denial here of the sublime delusion of pure wilderness, with its reminder that the highland landscape is itself an artifice created by the ancient felling of the Caledonian forest, and that there are towns and roads nearby.

“Because I like to test our common culture regarding such places, I take the titles of my work from Grimm’s Fairytales, with their shared inheritance landscape description. Finally, of course, the title in this case also serves as a memento of the splendour of such a climb.”